Nuimo is an intuitive and natural way to control your smart lights, locks, thermostats and other apps.

With the number of connected gizmos and gadgets entering the market on the rise, there will undoubtedly be a need for a universal smart controller that commands them all from one place. And while the smartphone may be the go-to remote at the moment, Nuimo is looking to introduce a much more intuitive, user-friendly interface that doesn’t necessarily have to be joined to the hip of a person.

The brainchild of Berlin-based startup Senic, Nuimo is an entirely programmable, wireless controller that can be used anywhere on just about any IoT object. The puck-like device offers a sleek, natural interface and four basic ways of interaction — click its disc, turn its dial, swipe its surface and gesture above it. Currently available in both black or white, it will be a welcomed addition to any smart home.

Beyond its aesthetics, Nuimo can be integrated right into an assortment of today’s most popular apps and appliances, including Spotify, YouTube, Netflix, Nest thermostats, Philips Hue LEDs, LIFX bulbs, Lockitron smart locks, as well as be paired with any computer as long as it has Bluetooth Low Energy connectivity. Nuimo also features a configurable 11×11 LED matrix that shows simple graphics through its face, allowing users to change programs on the fly or display a timer app in places like the kitchen.

“Unlike the touchscreen, Nuimo has a number of touch-based inputs that feel familiar and suit your needs. It incorporates capacitive touch, gesture recognition and a 360-degree analog ring that gives you precise control over everything from the volume of your music to switching off your lights. These inputs are easily mappable to the devices and applications you care about most,” its team writes.

Like a number of successful Kickstarter campaigns before it, the Nuimo team turned to the stalwart Atmel based Arduino platform for rapid prototyping. And to no surprise, Senic has even made it so that the all-in-one controller can sync with Arduino and other DIY projects. Since it was built on an open platform, Nuimo enables developers to create even more integration with their favorite apps and smart devices over time. 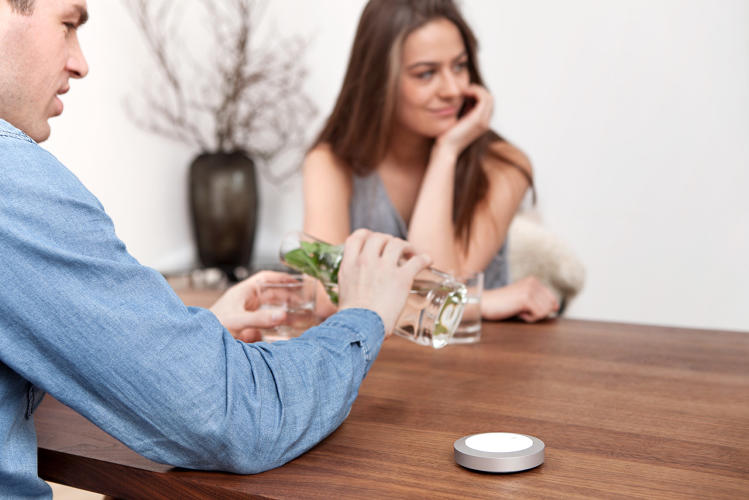 With a magnetic mount and a rechargeable battery life of up to four months, Nuimo can be placed pretty much anywhere. Sound like something you’d want in your smart home? Head over to its Kickstarter page, where the team has already surpassed its pledge goal of $61,374. Shipment is expected to kick off in October 2015.

2 thoughts on “Nuimo is a universal interface for the IoT”