Arduino will keep you from over-steeping your tea.

While coffee has been the fuel of engineers for years, others like Brian McEvoy sometimes prefer tea for their daily jolt in the morning and afternoon pick-me-up. In order to receive the maximum amount of caffeine, however, mastering the brewing time is imperative. Over-steeping tea sometimes can lead to a bitter taste and a reduction in caffeine levels, and as someone that gets easily distracted, this tends to happen to the Maker more times than not. In order to prevent this from occurring on a regular basis, as any DIYer would do, he decided to automate his tea cup to perfect every brew. 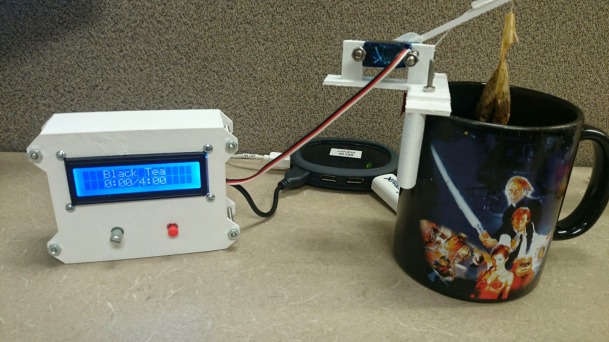 While tea timers are nothing out of the ordinary, McEvoy was determined to “(over)engineer something” using inexpensive hobby-grade electronics, and more importantly, something that would differentiate his project from countless others on sites like Instructables. This included incorporating a text display and having the cup (which as any Star Wars fan would agree, his choice was awesome) clip onto the machine.

In order to do this, the Maker devised a 3D-printed, tea-bagging mechanism that employs a 9g servo motor to control the amount of time that the leaves attached to the arm spends dipping into the mug. Meanwhile, another 3D-printed enclosure houses an Arduino Mini (ATmega328), a potentiometer to properly set the brewing process, an LCD screen to reveal the time and a start button to, well, get things going. A USB charging cable with its wired ends cut was soldered to the Arduino for power supply.

Sound like a simple device to solve your troubles in the morning? You can check out his detailed blog posts and follow along with his step-by-step tutorial on Instructables.

1 thought on “Make the perfect cup of tea with Arduino”