Massimo Banzi reveals a U.S. manufacturing partnership with Adafruit, a sister brand and the availability of its latest boards.

Earlier this afternoon, the one-and-only Massimo Banzi took the Maker Faire stage for the highly-anticipated “State of Arduino” address. Undoubtedly, all of us have seen the latest string of stories around the brand name and other challenges it has encountered with its former manufacturer. However, instead of focusing around its ongoing legal battle, the co-founder used the time to share a number of recent advancements to a jam-packed DIY crowd. These included a New York City manufacturing partnership with Adafruit, the launch of a sister brand dubbed Genuino (“genuine” in Italian) for boards outside of the United States, as well as the availability of the Arduino Zero and Wi-Fi Shield 101.

“Adafruit and Arduino.cc have been working together on open-source software and hardware for almost 10 years in a variety of ways, this is expanded partnership and manufacturing is part of our collective goal to make the world a better place through the sharing of ideas, code and hardware with our communities,” Adafruit’s very own Limor Fried shared in response to the big news. “We’re currently manufacturing the [ATtiny85] Arduino GEMMA with Arduino.cc right here in New York City at the Adafruit factory, it instantly became a top seller and we’re looking forward to bringing our manufacturing expertise and processes to start shipping more versions and types of Arduinos right here from the USA as soon as possible.” As for the unveiling of the sister brand, Genuino, this enables “Team CC” to resume production of boards in all of its markets, and allows for more localized manufacturing. MAKE: Magazine’s Mike Senese notes that the new brand will still emulate the 8- and 32-bit chips that Makers have grown accustomed to over the years, such as a Genuino Uno in a familiar teal and white color scheme. 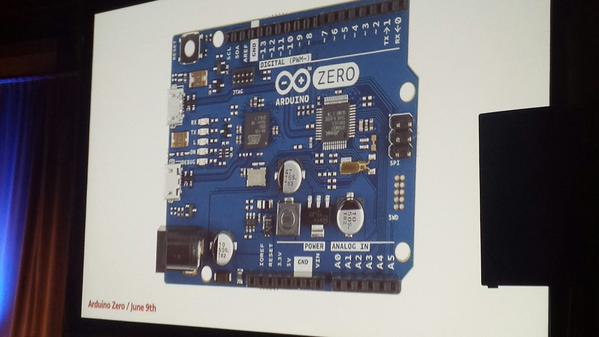 What’s more, Makers will no longer have to wait for the release dates of both the Zero and Wi-Fi Shield 101 either. That’s because Banzi revealed that the Zero will be available as of June 9th, and the Wi-Fi 101 Shield not too far after on June 25th. Debuted back at last year’s Faire, the 32-bit board is based on an Atmel | SMART SAM D21 Cortex-M0+ MCU and boasts flexible peripherals along with Atmel’s Embedded Debugger (EDBG) to facilitate a full debug interface on the SAM D21 without requiring any supplemental hardware. Meanwhile, the Wi-Fi Shield 101 is powered by an ATWINC1500 wireless controller and protected with an ATECC108 crypto engine. This provides users with a simple extension that can be seamlessly connected to any Arduino to make way for high-performance, secure Wi-Fi connectivity. 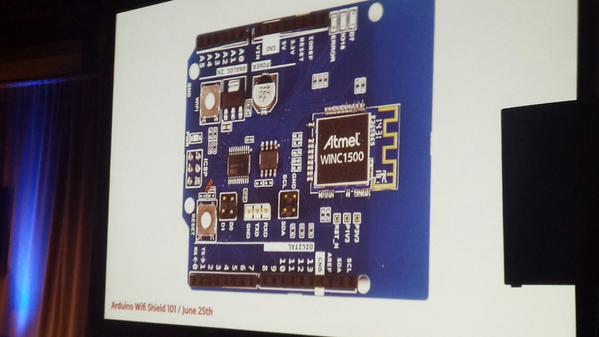 Banzi also touched upon a few other key announcements, like the first modular product produced in their Bangalore office, named Modulino, as well as a new set of online tools, known as Arduino Create, that will accelerate the building process for Makers by eliminating the need to switch between various resources.

You can watch the presentation in its entirety below.