Telepresence robots have been used in a wide-range of applications, from remotely attending a meeting and visiting a museum to exploring space and scoping out a battlefield. As its name implies, these machines enable a user to make it as though they are standing in a distant location by navigating around an environment via a robotic surrogate. Yet, despite advancements in technology, the experience is still not exactly like real-life. That may may soon all change, especially if left in the hands of University of Pennsylvania engineers. 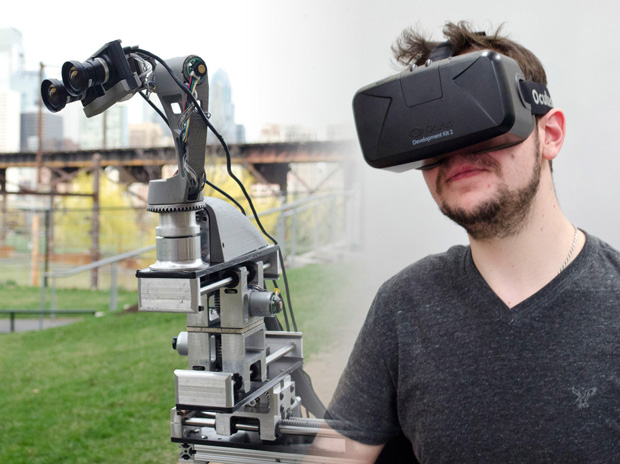 One team of researchers has set out to revolutionize telepresence robotics by building what they call Dexterous Observational Roving Automaton (DORA), which works with the Oculus Rift VR headset to establish a groundbreaking physical-virtual interface. Nowadays, most commercial devices are merely screens or tablets on moving platforms. However, DORA aspires to make it as though a user has actually been transported to another place.

In an effort to offer such an immersive experience, the remote robot is equipped with a pair of cameras that not only stream three-dimensional views of its terrain, but looks up/down, forward/backward and left/right as a VR headset wearer turns their own head. This is accomplished by precisely matching the movements of the headset wearer’s own neck in all six degrees of freedom through an inertial measurement unit (IMU) and infrared beacon tracking. That data is wirelessly transmitted to the robot’s embedded Atmel based Arduino and Intel Edison microcontrollers, prompting its camera-equipped head to mimic the motions of the user. “DORA is based upon a fundamentally visceral human experience—that of experiencing a place primarily through the stimulation of sight and sound, and that of social interaction with other human beings, particularly with regards to the underlying meaning and subtlety associated with that interaction. At its core, the DORA platform explores the question of what it means to be present in a space, and how one’s presence affects the people and space around him or her,” its creators tell IEEE Spectrum.

Still in its prototyping stage, DORA operates over a radio link with a line of sight range of just over four miles. However, the team is looking to improve its responsiveness with a lag less than 60ms and to transition to Wi-Fi or 4G connections. This will allow for the system to be used in a variety of settings, such as virtual tourism, emergency response, and maybe one day even video chat.

Intrigued? Head over to the team’s official page to explore the project in more detail.