By 2020, the total Asia/Pacific (excluding Japan) market size will increase from $250 billion to $583 billion.

The Asia/Pacific Internet of Things (IoT) industry will continue its strong growth with the number of connected units expected to increase from 3.1 billion to 8.6 billion by 2020. According to a new report from IDC, over this same period, the market size for the entire region excluding Japan (APeJ) will jump from $250 billion to $583 billion. 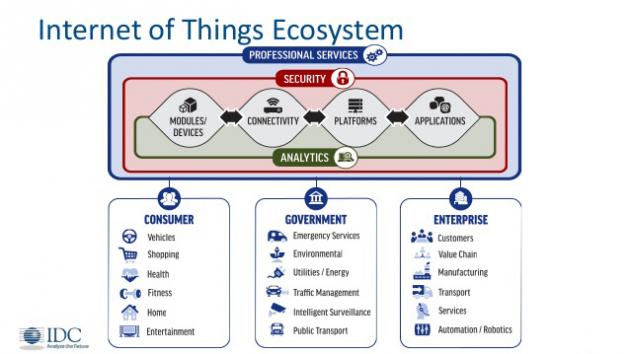 Charles Reed Anderson, AVP and Head of Mobility & Internet of Things at IDC Asia/Pacific, said the IoT industry has matured considerably over the past year, with a number of large government initiatives across APeJ, and China in particular, driving demand.

“This increase in market demand has led to an increased focus on IoT from leading ICT vendors, as well as startups – with each keen to grab their share of the growing IoT market.”

IDC’s IoT Market Forecast reveals that China will not only continue to dominate the Asia/Pacific region — accounting for 59% of the APeJ market opportunity by 2020 — but will be emerge as one of the leading markets throughout the world with nearly one out of every five units connected over the net five years to be in China. However, market size is not the same as market maturity. In fact, the top three “most mature markets” are South Korea, Australia, and New Zealand, while China came in sixth out of the 13 APeJ Countries.

“High-level IoT market forecasts of information by region or country can be useful to certain audiences. It adds little value to those functional areas with more specific requirements. Sales and marketing, for instance, require IoT forecasts aligned to industry verticals so they can effectively set targets and tailor their go-to-market messaging; while product management requires IoT forecasts aligned to use cases such as digital signage so they can understand the addressable market for their solution portfolio across multiple industries,” adds Anderson.

The IoT market forecast also looks at which industries are leading the way with IoT. The government industry tops the charts, as national, regional and city governments aggressively try to leverage smarter solutions to drive new revenue streams, reduce costs and enhance citizen services as part of their smart government initiatives. What’s more, an even more recent study from IDC found that more than 50% of government agencies with direct citizen engagement missions will direct at least 25% of their programmatic budget to third platform technologies and IoT.

Other leading industries include utilities, discrete manufacturing, healthcare and retail.

“For the vendors looking at IoT, it is vital they understand which industries are driving the markets they are targeting as each country has its own unique drivers. Singapore’s leading industries, for instance, are telecoms, consumer and transport, none of which are ranked in the APeJ top five industries for market opportunity. Having this level of market knowledge will allow the vendor community to tailor their go-to-market messaging for each market and increase their chances of success.”