System design used to be an exercise in optimizing speed. That has since changed. Nowadays, embedded systems pack plenty of performance to handle a number of task, leading the challenge for designers to shift to completing those tasks using as little energy as possible — but not necessarily making it as fast as possible. As you can imagine, this has created quite the competitive environment on the processor battlefield amongst vendors, each seeking to attain the lowest power solution on the market.

“The surge in popularity of battery-powered electronics has made battery life a primary system-design consideration. In extreme cases, the desire is not to run off of a battery at all, but to harvest energy from local sources to run a system — which requires the utmost power frugality,” writes Andreas Eieland, Atmel Director of Product Marketing. “In addition, there’s a growing family of devices like smoke detectors, door locks, and industrial sensors (4-20 mA and 10-50 mA) that can draw power through their inputs, and that power is limited.”

These sort of trends point to the significance of reducing the power requirements of electronic systems. However, the varying technologies that provide the necessary performance make power reduction harder. Fortunately, Atmel has been focusing on low power consumption for more than 10 years across its portfolio of AVR and Atmel ǀ SMART ARM-based processors. Many integrated peripherals and design techniques are used to minimize power consumption in real-world applications, such as integrated hardware DMA and event system to offload the CPU in active and standby modes, switching off or reducing clock or supply on device portions not in use, intelligent SleepWalking peripherals enabling CPU to remain in deep sleep longer, fast wake-up from low power modes, low voltage operation with full functionality, as well as careful balancing of high performance and low leakage transistors in the MCU design. 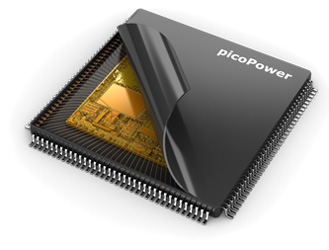 With picoPower technology found in AVR and Atmel ǀ SMART MCUs, Atmel has taken it a step further. Indeed, all picoPower devices are designed from the ground up for lowest possible power consumption from transistor design and process geometry, sleep modes, flexible clocking options, to intelligent peripherals. Atmel picoPower devices can operate down to 1.62V while still maintaining all functionality, including analog functions. They have short wake-up times, with multiple wake-up sources from even the deepest sleep modes. Some elements of picoPower technology cannot be directly manipulated by the user, but they form a solid base that enables ultra-low power application development without compromising functionality. Meanwhile, flexible and powerful features and peripherals lets users apply an assortment of techniques to reduce a system’s total power consumption even further.

Then, there’s the Atmel | SMART SAM L21 microcontroller, which has broken all ultra-low power performance barriers to date. These Cortex-M0+-based MCUs can maintain system functionality, all while consuming just one-third the power of comparable products on the market today. This device delivers ultra-low power running down to 35µA/MHz in active mode, consuming less than 900nA with full 32kB RAM retention. With rapid wake-up times, Event System, Sleepwalking and the innovative picoPower peripherals, the SAM L21 is ideal for handheld and battery-operated devices for a variety of Internet of Things (IoT) applications.

The ultra-low power SAM L family not only broadens the Atmel | SMART portfolio, but extends battery life from years to decades, reducing the number of times batteries need to be changed in devices such as fire alarms, healthcare, medical, wearable, and equipment placed in rural, agriculture, offshore and other remote areas. The SAM L21 combines ultra-low power with Flash and SRAM that are large enough to run both the application and wireless stacks — three features that are cornerstones of most IoT applications. Sampling now, the SAM L21 comes complete with a development platform including an Xplained Pro kit, code libraries and Atmel Studio support.

So how does the SAM L21 stack up against the others? Ahead of the pack, of course! As an alternative to so-called “bench marketing” of low power products, nearly ever large semiconductor company — and several smaller ones that focus on low power — have collaborated in a working group formed by the Embedded Microprocessor Benchmark Consortium (EEMBC). The EEMBC ULPBench uses standardized test measurement hardware to strictly define a benchmark code for use by vendors, considering energy efficiency and running on 8-, 16- and 32-bit architectures. At the moment, the Atmel | SMART SAM L21 product boasts the highest ULPBench score of any microcontroller, regardless of CPU.

“In Atmel’s announcement last year for the company’s SAM L21 family, I had pointed out the amazingly low current consumption ratings for both the active and sleep mode operation of this product family – now I can confirm this opinion with concrete data derived from the EEMBC ULPBench,” explained Markus Levy, EEMBC President and Founder. “Atmel achieved the lowest power of any Cortex-M based processor and MCU in the world because of its patented ultra-low power picoPower technology. These ULPBench results are remarkable, demonstrating the company’s low-power expertise utilizing DC-DC conversion for voltage monitoring, as well as other innovative techniques.”

While running the EEMBC ULPBench, the SAM L21 achieves a staggering score of 185, the highest publicly-recorded score for any Cortex-M based processor or MCU in the world — and significantly higher than the 167 and 123 scores announced by other vendors. The SAM L21 family consumes less than 940nA with full 40kB SRAM retention, real-time clock and calendar and 200nA in the deepest sleep mode. 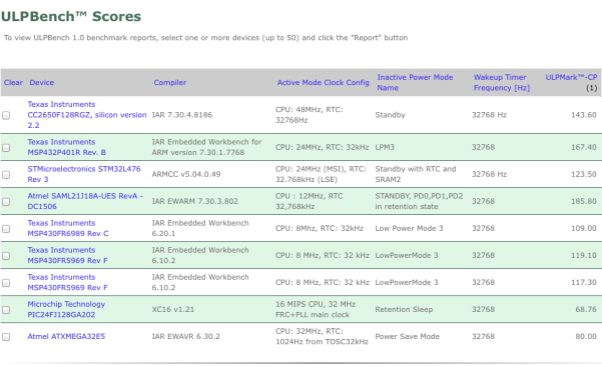 In fact, a recent EE Times writeup delving deeper into competition even revealed, “TI surpassed its own earlier result by announcing the MSP-432 family based on the Cortex M4F. It achieved a ULPBench score of 167.4. While TI was briefing the media on this product, however, Atmel quietly published a ULPBench score of 185.8 for its SAM L21 MCU based on the Cortex M0+.”

Beyond the recently-unveiled ARM-based chip, it’s also important to note the 0.7V tinyAVR. A typical microcontroller requires at least 1.8V to operate, while the voltage of a single battery-cell typically ranges from 1.2V to 1.5V when fully charged, and then drops gradually below 1V during use, still holding a reasonable amount of charge. This means a regular MCU needs at least two battery cells. Whereas, Atmel has solved this problem by integrating a boost converter inside the ATtiny43U, converting a DC voltage to a higher level, and bridging the gap between minimum supply voltage of the MCU and the typical output voltages of a standard single cell battery. The boost converter provides the chip with a fixed supply voltage of 3.0V from a single battery cell even when the battery voltage drops down to 0.7V. This allows non-rechargeable batteries to be drained to the minimum, thereby extending the battery life. Programmable shut-off levels above the critical minimum voltage level avoid damaging the battery cell of rechargeable batteries. 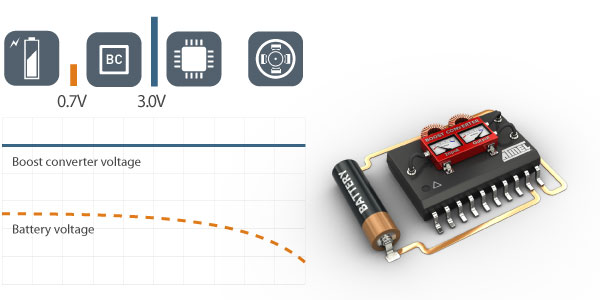