SATELLITEN works by tracing the paths of satellites in real-time on a paper map.

Satellites are used for nearly all modern-day achievements, from communication and navigation systems to environmental monitoring and military purposes. Since the launch of the Sputnik 1 in 1957, more than 6,600 of them have gone into orbit, of which about 3,600 remain in space with only 1,000 or so still operational today. Yet, GPS accounts for just 24 of these active extraterrestrial objects. That’s why Berlin studio Quadrature has developed a custom-built machine that is capable of keeping tabs on the number of satellite flyovers and plotting them in real-time. 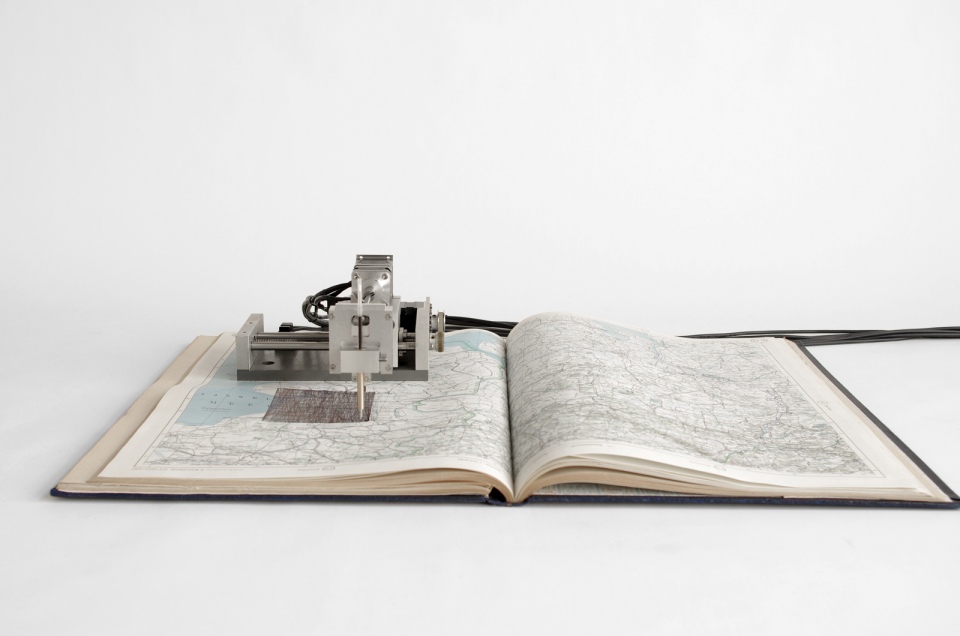 SATELLITEN works by tracing the satellite pathways on a paper map with pen, all within a 10 centimeter square area, as they fly overhead. By scribbling the journeys in ink until each capsule leaves the horizon will eventually result in an almost entirely blacked-out square, or as its creators call it, “a temporal window, showing the seemingly arbitrary but highly structured activities in lower Earth orbit.” The device uses its own position as a starting point and old atlases of the area as a benchmark for its drawings, while relying on a database maintained by the U.S. Air Force to track the lines of satellite activity.

“For a long time, maps and atlases used to be one of the only sources for geographical knowledge. Now the paths of the satellites start to form on top of the familiar neighborhoods, thus setting the normally invisible traffic in relation to our usual habitat. But as time passes the lines of the satellites will obliterate the well-known streets and cities, overwriting not only the information the map originally contained but as well the marks left by the preceding satellites,” the team shares. In order to make this project possible, Quadrature used a number of stepper motors, motor drivers and sensors, which were driven by a combination of Arduino and Raspberry Pi.

Interested? Check out the project’s official page to learn more.