Diyouware’s innovative PCB fabricator will give Makers the ability to create PCB prototypes right at home.

A pair of Madrid-based brothers, who you may recall from their recent DiyouPCB project, have now released the design for a new 3D printer. Diyouware’s TwinTeeth — which gets its name from the principle of moving the construction bed instead of the tool head — is best described as an open-source PCB mini-factory geared towards electronic-savvy hobbyists. It is an innovative fabricator of Arduino shield-size PCBs which will enable Makers to create circuit board prototypes right in the comfort of their own homes.

The mini-factory can perform a variety of functions, including photoengraving with a UV laser on sensitive film or pre-sensitized boards, drilling holes using any mini-rotary tool, dispensing solder paste onto SMD PCB pads, plotting circuits with a permanent pen-maker, as well as 3D printing knobs, casings, front-panels and circuits with conductive filament.

Its interchangeable tool head allows users to automate the process of most PCB fabrication stages, with its only limitation being a small Arduino shield sized workspace. The robotic device draws the PCB circuits in rastering mode much like any paper printer does, moving the laser (or the bed in their case) from one side to the other. TwinTeeth boasts auto-bed leveling, thereby giving users a flat plate with a tolerance of less than 0.01mm during the printing process.

“While traditional 3D printers or CNC machines move the tool while the working piece is fixed on the bed, TwinTeeth moves the bed while the tool is fixed. The first method is good if the tool is small and you want to make large pieces. But if the tool is heavy like a mini-rotary tool or a 3D extruder and the piece you are working on is light like a PCB, it is better to move the piece because it provides more precision and reduces vibrations,” the duo writes.

TwinTeeth is embedded with the well-known combination of an Arduino Mega 2560 (ATmega2560), a RAMPS 1.4 control board and A4988 drivers,  and is powered by a trio of Nema 17 motors. Aside from that, Diyouware used modified Marlin firmware to support the multiple tools, manage and control the laser, implement the auto-focus system, print in rastering mode, and improve the buffering. A small USB camera was included to make it easier for Makers to see tiny details on high-density PCBs. According to its creators, the built-in camera is also useful to set the home position, a very important element in obtaining accuracy. 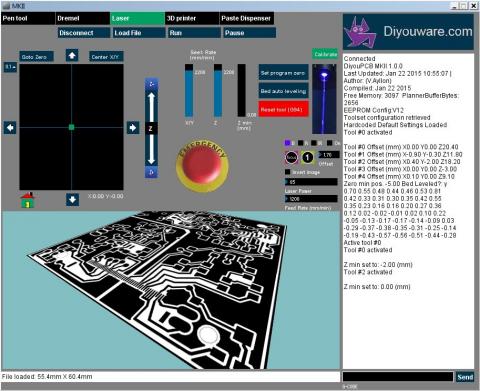 Similar to their earlier project, the Makers equipped TwinTeeth with the same PHR-803T optical pickup used in the DiyouPCB with a wavelength of 405nm. Meanwhile, Diyouware developed an entire software suite for the mini-factory, which makes for easier management and control of the machine. This program enables users to connect and disconnect via USB, select tools, move the bed, go to homing position, set the speed and Z position, calibrate the robot, stop and resume a print job, and toggle the camera view, among a number of other things.