Tacuino is a modular Arduino-compatible educational kit for Makers. And to think, you wanted to throw away your Tic Tac box…

With the rise of the Maker Movement, we’ve seen countless takes on highly-popular Arduino boards in recent months. Not only does the open-source prototyping platform come in a number of shapes and sizes, DIYers are now discovering ways to create their own. In fact, Instructables user “MakersBox” did just that, by devising an uber-mini, modular board that can fit inside a Tic Tac box.

Aptly named Tacuino, the Arduino-compatible board is based on a tinyAVR MCU capable of running the Arduino IDE — a method that could also be seen with last year’s ATtiny167 based Digispark Pro board project.

“After finding the Paperduino project, I learned that a bootloader could be placed on the inexpensive ATtiny85 chips so that they could be programmed like a regular Arduino,” MakersBox writes.

The Tacuino is self-contained in that it includes an inexpensive CR2032 battery power source, two inputs (touch and light sensors) as well as two outputs (sound and LEDs). As the Maker explained, “This was just enough ‘umph’ for a reasonable beginning project while demonstrating some of the amazing abilities of an embedded circuit.”

In addition, Tacuino’s modular design allows it to be installed in a soft-circuit with conductive thread, or even other projects using jumper wire. 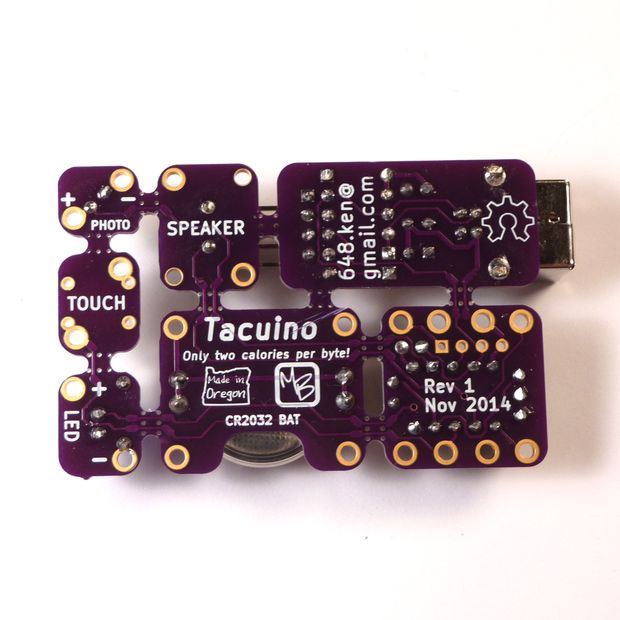 Intrigued? Head on over the project’s official page here for a step-by-step breakdown of the build. Those who rather not collect each of the required parts themselves can also find the ready-to-assemble kit on Tindie here.