Of course, just moments after completing our list of Maker musical masterpieces, we came across the nifty ukule-LED, an LED-embedded ukulele that uses lights to instruct how to play chords and songs.

Designed by Cornell students Raghav Subramaniam and Jeff Tian, ukule-LED is equipped with 16 NeoPixels that are situated along the first four positions of the fretboard. This allows those playing the device to easily learn how to play each chord. All of the 16 LEDs are connected in series to a single pin on the ATmega1284P that sits on a board mounted to the bottom of the ukulele along with power and serial.

ukule-LED has two modes of operations: “Play” and “Practice.” First, in “play” mode, the user can feed the system a song file, a text file that contains the tempo, time signature, and an ordered listing of the chords in a song. The ukulele will then light up the correct chords at the correct times in the song. (Think of it like Guitar Hero.) While in “practice” mode, the user can specify a single chord, which is lit up indefinitely. For those more experienced musicians, the ukule-LED can still serve as an excellent chord reference. 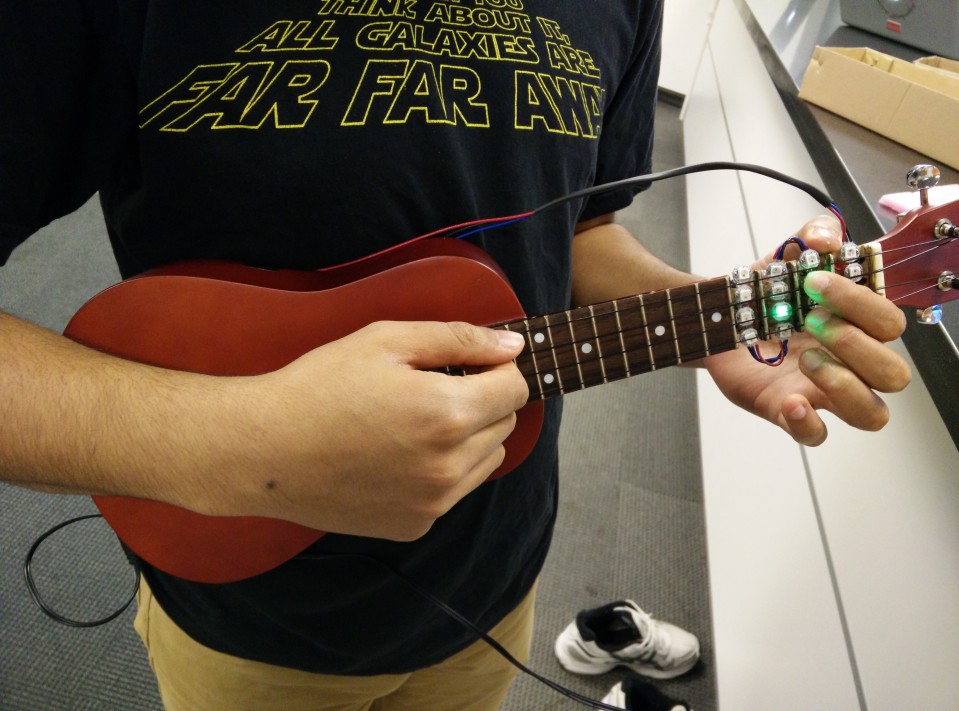 “Our inspiration for this project comes from a variety of sources. Our idea to upgrade a musical instrument using LEDs comes from various Hackaday articles, including this one. We considered using LEDs to augment a couple of other instruments, including a keyboard and a guitar, before settling on a ukulele,” Subramaniam and Tian explain.

Once mastering the earlier stages of the string instrument, those wishing to build upon their existing skills can do so thanks to ukule-LED’s extension capabilities. Currently, the system only supports major, minor and 7th chords, which light up in green, red and blue, respectively. The Makers note that the project was built using an open, highly expandable Python script available for download.

See the DIY ukulele in action below!

Interested in fine tuning your strumming skills? Head on over to its official project page here.