Hailed as the iPhone 6’s brother from an Android mother, the time for Google’s Nexus 6 has arrived. As soon as the crew over at iFixit got their hands on the new device, which was developed in collaboration with Motorola, we knew what came next! The team dismantled the recently-unveiled phablet to offer a closer glimpse at its insides.

Catering to consumers’ appetite for larger displays, Nexus 6 boasts a 5.96-inch touchscreen and features a 2560 x 1440 AMOLED panel. in addition, it runs on Google’s new operating system, Android 5.0 Lollipop, and will be available in both 32GB and 64GB models.

The teardown revealed that the phablet packs 3GB of LPDDR3 RAM, a Snapdragon 805 SoC, various cellular components from Qualcomm, a 3220 mAh “non-removable” battery, as well as 13 MP rear-facing camera and a 2 MP front-facing camera. 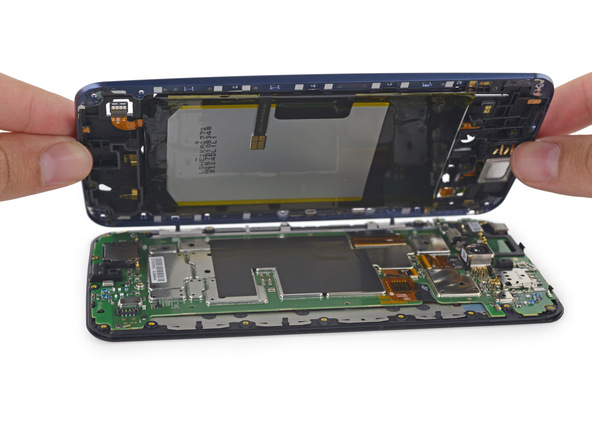 After freeing the motherboard from the display assembly, iFixit spotted its lone IC: an Atmel MXT640T touchscreen controller.

And for those who frequently break or enjoy tearing apart their phones, you’re in luck. The flagship device received a repairability score of 7 out of 10. Interested in getting up close and personal with the Nexus 6? You can check out the entire step-by-step teardown here.