A Maker by the name of Afrdt has created a wearable EMF detector, aptly named “Divergence,” that provides haptic and sonic feedback of surrounding electromagnetic sources.

As Hackaday writes, after spending two weeks on a boat as an artist-in-residence in Linz, Austria, Afrdt decided to design a dress that detects EMF waves and outputs them to vibration motors and a headphone jack.

“Divergence is inspired by sci-fi aesthetics and real physics and questions the way we perceive our surroundings. It deals with the question of how to create physicality in order to demonstrate and sense the invisible forces that surround us.”

Comprised of soft-circuitry, an [ATmega32U4 MCU] Adafruit FLORA sewn into the body of the dress is responsible for providing the feedback.

“The haptic feedback is experienced in the form of vibration patterns and the sonic feedback in the form of tones that variate in pitch depending on the strength of the signal. The detection takes place through the creation of two embroidered coils incorporated in sleeves of the garment that serve as ‘antennas’ for sensing EM fields.”

In addition, the zipper functions as a low-pass filter and volume control for the jack. One side bears resistive tape and runs to the FLORA, which is programmed to play an 800Hz tone; the other runs to the headphone jack via conductive thread. Hackaday notes that when the zipper is opened, the pitch increases to toward the maximum pitch of 880Hz. 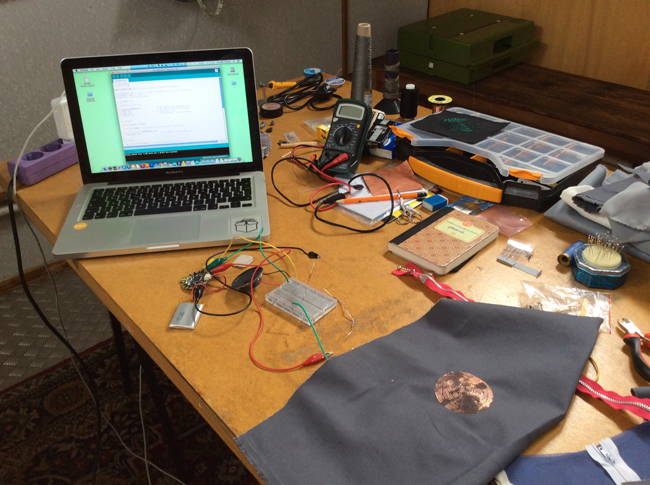 Interested in learning more? You can head over to the project’s official page here.