After being named one of the early lead licensees of the processor, we announced a new family of Atmel | SMART ARM Cortex-M7-based MCUs, which are well positioned between our existing ARM Cortex-M-based MCUs and Cortex-A-based MPUs. The new devices will address high-growth markets including the Internet of Things (IoT) and wearables, as well as automotive and industrial applications that require both high performance and power efficiency.

During ARM TechCon 2014, Atmel’s Pat Sullivan had the chance to catch up with Dominic Pajak of ARM to discuss the company’s newly-introduced Atmel | SMART ARM Cortex-M7-based processor.

“We are proud to be a lead partner in the Cortex-M7 product. We think it’s a great device and really like the performance of it. It actually sits really well between the M4 and A5/A7 portfolios, ” Sullivan told Pajak. “I see this as a really nice filler for us. It allows our customers working in both areas to have a bridge product and a really nice roadmap moving forward.”

As to which IoT segments the Atmel Cortex-M7 processors will be used, “We see it in mid-range wearable applications, as well as healthcare devices in that area,” Sullivan notes.

Shortly thereafter, Sullivan joined fellow industry heavyweights (ST Micro and Freescale) for a standing-room only panel on the microcontroller. During the session, Sullivan said he sees the Cortex-M7 also succeeding in networking and gateway arenas.

“We see it addressing a lot of the system integration, performance issues, and power issues that we have. We also see it working in networking, Internet of Things and smart energy. We think this particular core is well suited for the areas where we see the highest growth rate.” 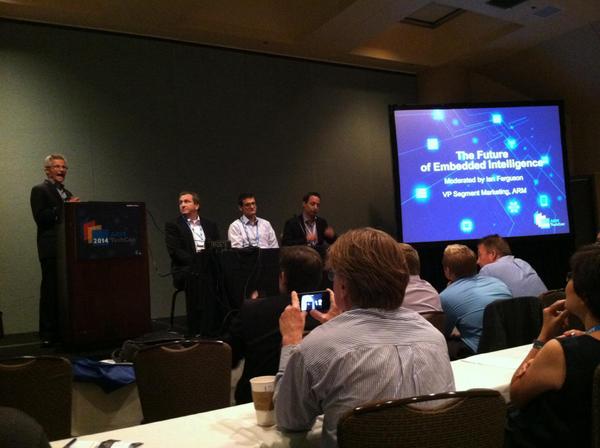 “Consistent architecture with high-performance is one of the most important things we see in ARM Cortex-M7.” He later added, “Huge data is driving a connected home and it’s coming sooner than we think.”

Sullivan concluded, “We’re all going to be in a more connected world in the future, good and bad. We may not even recognize it.”

While sampling to select customers is currently underway, general availability of the Xplained kit is expected in early 2015. Stay tuned!