In the fourth episode of my interview with Vegard Wollan, the co-inventor of the AVR MCU alluded to the passionate following that Atmel and its 8-bit chip have developed.

I can personally attest to this. When one of my pals said he was “going off the reservation” to solve an AVR problem, I thought he meant he was going to use a certain competitor’s microcontroller. Turns out, he was simply referring that he was headed to Atmel’s AVR Freaks forum to get an answer, rather than put in a support ticket or use our knowledge base. What delighted me was when he said, “I would rather jump off a bridge than use a [competitor] part.” Simple as that.

Atmel recently rolled out a redesigned site for the die-hard community, which incorporates both feedback and testing provided by the users themselves. Aside from the new look, the site will utilize a much more robust infrastructure and web technologies to provide users with an enhanced experience. (For those seeking an avid community built around the Atmel | SMART ARM-based products, you can check out AT91.com.)

What I loved about the interview is how Vegard explained it was his college experience that convinced him of the value of a strong user community. We all remember those 3:00am dorm sessions where we would discuss the meaning of life. Vegard noted that Atmel would provide servers and gifts and anything else we could do to support the user community.

The co-inventor also brought along a few copies of the first AVR data book. I was amused to see this post on the AVR Freaks forum, by a user that did not know what a “data book” was. Boy, that makes me feel old! See sonny, back when the Earth was still cooling and dinosaurs roamed the fields, engineers didn’t do everything at their fingertip on the intertube. Companies, much like Atmel, would take all their datasheets and bind them up in this thing called a printed book. I have to admit, it was a great day when I tossed my 500 pounds of databooks in the dumpster. Bless the Internet, it made life so much better. 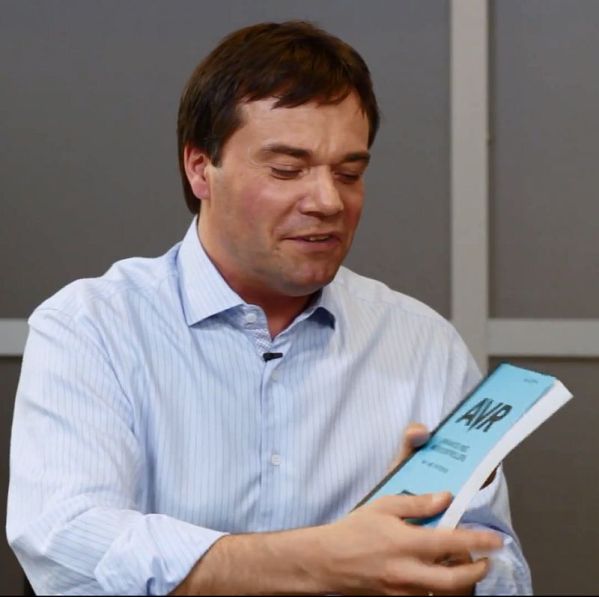 Vegard Wollan holds up the draft version of the May 1995 AVR databook.

Of course, that draft was only a checkplot for the real book. The video also shows Vegard holding up the final version of the AVR databook that us old-timers so frequently depended on. How we would have killed for the modern microcontroller selector guide! 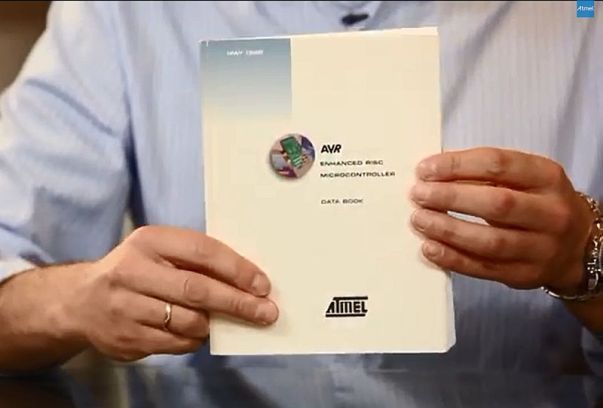 Here, Vegard Wollan holds up the actual printed data book from May 1995, the first release of the famous AVR microcontroller to the world. They had to make some changes so this databook has parts listed that Atmel never actually produced, and was missing some other parts. Those 4-months printed book lead times were a killer for everybody.

So there you have it, folks. With billions of chips in the wild, a following of over 290,000 AVR Freaks and nearly 100,000 forum posts around the topic annually, it’s safe to say we’ve come a long way since the earliest days of the 8-bit microcontroller. If you’re not already a member of the growing AVR Freaks community, be sure to head on over to the newly-updated site and join today!