Following an exciting two days of MakerCon and on the eve of Maker Faire, the team of Atmel and Arduino have announced the launch of the Arduino Wi-Fi Shield 101, a shield that enables rapid prototyping of Internet of Things (IoT) applications on the highly-popular open-source platform. 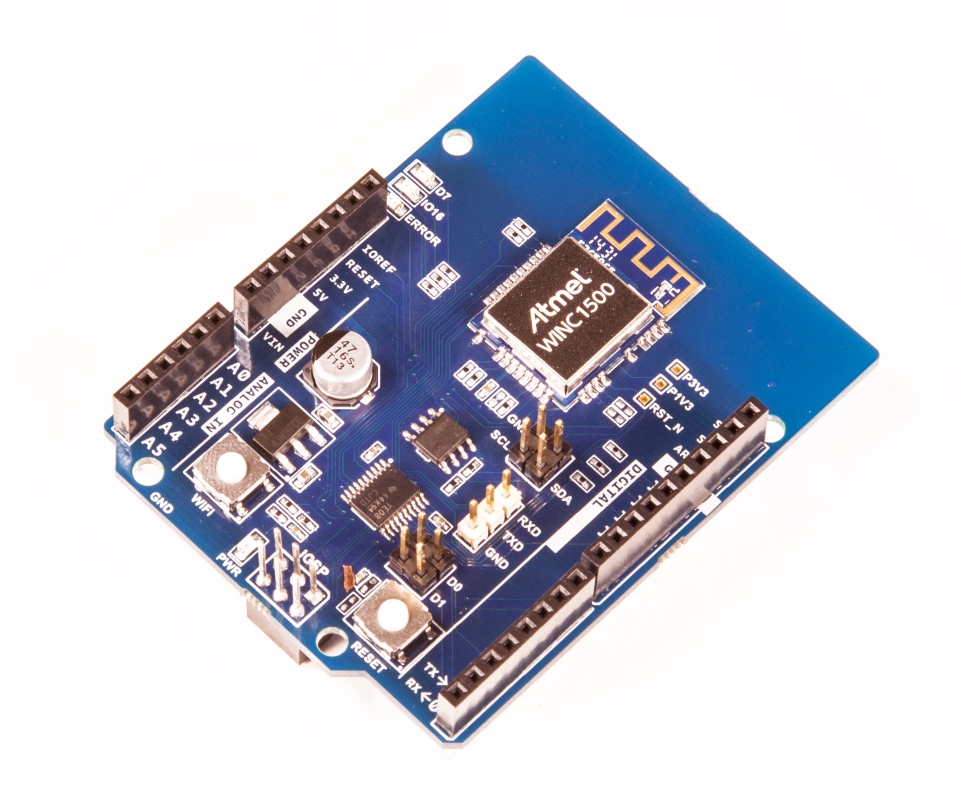 The cost-effective, secure Arduino Wi-Fi Shield 101 is an easy-to-use extension that can seamlessly be connected to any Arduino board enabling high-performance Wi-Fi connectivity. This new shield gives the design community more opportunities to securely connect IoT applications, ranging from consumer goods to wearables, robotics, high-tech devices and more.

The Arduino Wi-Fi Shield 101 is powered by Atmel’s wireless network controller, part of the Atmel SmartConnect family, and also includes the CryptoAuthentication device which allows users to easily incorporate hardware authentication capability in their design.

“In this increasingly connected world, the Arduino Wi-Fi Shield 101 will help drive more inventions in the IoT market,” explained Arduino Co-Founder Massimo Banzi. “Expanding our portfolio of Arduino extensions, this new shield can flawlessly connect to any modern Arduino board giving our community more options for connectivity, along with added security elements to their creative projects.”

Makers can connect the Arduino Wi-Fi Shield 101 to any modern Arduino R3 board, enabling connectivity to the Internet using any traditional Wi-Fi access points. It is based on the WINC1500 802.11b/g/n network controller which features an integrated TCP/IP stack, TLS security and SoftAP for seamless provisioning. It also features an Atmel authentication security device that can be used for keys, passwords or secret data.

In true Arduino fashion, every element of the platform – hardware, software and documentation – is freely available and open-source. This offers the Maker community to discover exactly how it’s made and then to utilize its design as the starting point for their own circuits. An open-source Wi-Fi library will also be available to enable users to write sketches that connect to the Internet using the shield. The newly-unveiled shield connects to an Arduino board using long wire-wrap headers which extend through the shield, thus keeping the pin layout intact and allows other shields to be stacked on top.

“Through our long standing partnership with Arduino, Atmel is committed to the Maker Movement and excited to enable more connected devices in the Internet of Things,” said Reza Kazerounian, Senior Vice President and General Manager at Atmel. “We’ve partnered with Arduino to develop a true turn-key IoT solution that will allow the community to create unlimited possibilities. We are eager to see the breadth of next-generation IoT products that this new shield will help designers achieve.”

For those heading to World Maker Faire New York, swing by booth #EP24 to get a firsthand look at the Wi-Fi Shield 101. Additionally, Arduino and Atmel will be hosting a Meet & Greet to discuss this jointly-developed shield on Friday, September 19 from 6:30 – 8:30pm ET at NY Hall of Science. Arduino’s Massimo Banzi and Atmel’s Reza Kazerounian will be speaking at this event and a number of innovative Maker demos will also be showcased. To attend, please RSVP to pr@atmel.com.

Since 2005, a worldwide community of Makers has gathered around this open source platform. And, Atmel microcontrollers were there from the outset, providing simple but powerful microcontrollers (MCUs) as the hardware side of the equation. Artists, designers, inventors, engineers, musicians and students alike have turned to Arduino boards — designed around Atmel AVR or Atmel ARM-based MCUs — to bring their ideas to life.

By delivering a unique combination of performance, power efficiency and design flexibility, Atmel MCUs perfectly complement Arduino and the needs of makers. More importantly, they come virtually pre-integrated the peripherals needed to sense and control the physical world. Atmel MCUs and Arduino—the original duo at the heart of the global maker movement. The just-announced shield will provide secure Wi-Fi connectivity for all Arduino platforms, thereby enabling unlimited possibilities for smart, connected IoT devices.