Maker Luke Berndt wasn’t satisfied with his iPhone’s traditional Notification Center, as he found he was randomly missing call or message notices. Taking matters into his own hands, Berndt tasked the phone’s Apple Notifications Center Services (ANCS) to communicate with an Atmel based Arduino to make sure he never missed a beat! 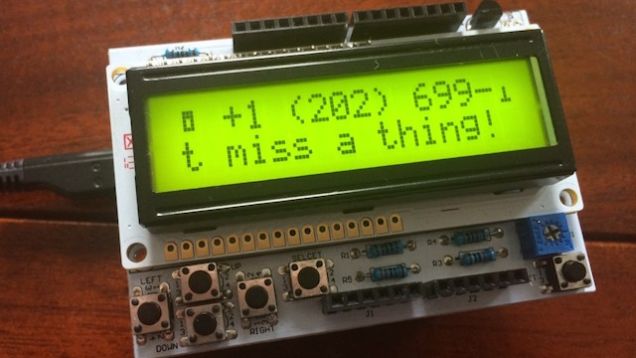 Utilizing ANCS ability to send out notifications over Bluetooth LE, the Maker took a compatible Arduino shield and synced it with his iPhone. When describing the ANCS’ functionality, Luke says, “that it works natively and doesn’t require any Apps to be installed on the iOS device,” therefore allowing plenty of tinkering to occur.

Once the phone and shield were paired, Berndt attached a simple LCD screen to provide constant visual updates. “The library works around call backs and will call the function you specify when a device connects/disconnects and sends a Notification.” Thus assuring you are always up to date on your latest communications.

Though the Maker’s project is still a work in progress, he plans on expanding the memory in coming weeks to add the device’s functionality. He is currently auditioning names for his creation and is pondering the moniker of Notif. Sounds good to us, Luke!

To read more about this build, head over to the project’s original blog post.