As previously reported on Bits & Pieces, 3D printing continues its march into the mainstream medical world. Oxford Performance Materials (OPM) made news last year when it created a 3D-printed implant to replace 75% of a patient’s skull. The success of that operation laid the groundwork to move on to other bones, culminating in the recent FDA approval of its OsteoFab Patient-Specific Facial Device, a customizable implant for facial reconstruction. Today, we are sharing further evidence that the process is integrating itself deeper into our society as the FDA has approved a series of 3D printed facial implants. With the help of 3D printers, doctors can now produce an FDA-cleared replica of a patient’s missing skull or jawbone.

OPM has been at the forefront of the technology and additive materials for many years now. Last February, the FDA permitted OPM’s first design for a fully customizable 3D-printed cranial implant. Recently, their product, the OsteoFab® Patient-Specific Facial Device, also received 510(k) clearance from the FDA.

According to a recent press release, the facial device is the first and only FDA cleared 3D-printed polymeric implant for facial indications. “There has been a substantial unmet need in personalized medicine for truly individualized – yet economical – solutions for facial reconstruction. A technology did not exist that could treat the highly complex anatomy of these demanding cases,” notes Scott Defelice, CEO and Chairman of OPM.

There is no doubt that the intricacy and customizability of 3D printing will open doors to treat cases that were out of reach just a few years ago. “Having both cranial and facial devices cleared now enables us to answer ever more complex cases where upper facial structures can be incorporated with cranial implants as a single device,” adds OPM President Severine Zygmont. She also believes this combination will not only, “improve patient outcomes, but fundamentally improve the economics of orthopedics on a global scale – for developed and developing countries.”

The FDA’s approval also means orthopedics as a whole is set to benefit, given the previous successes with cranial implant devices. “These are disruptive changes that will allow the industry to provide the finest levels of healthcare to more people at a lower cost,” said Severine Zygmont, President of OPM Biomedical. The device is likely just the next in a long line of 3D-printed biomedical advances, coming on the heels of 3D-printed prosthetic limbs, blood vessels and windpipes. Synthetic replacements for the body’s normal bank of organs have existed for decades, and 3D printing is slated to optimize the existing process even further.

The worldwide orthopedic market has global revenues of more than $36 billion in 2008, Forbes reports. According to new research by Freedonia, the demand for implantable medical devices in the United States alone is projected to increase 7.7% annually to $52 billion in 2015. The study reported that orthopedic implants will be one of the fastest growing and nanotechnology and biotechnology will fuel growth and demand to the market. 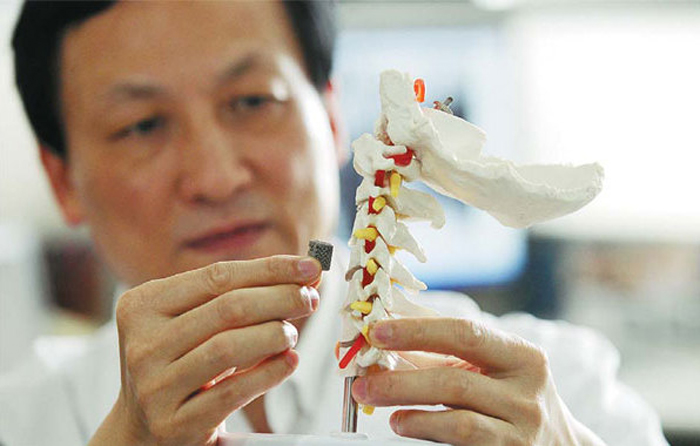 So, as you can see, facial and cranial implants aren’t the only areas where the 3D printing process is infiltrating the medical community. Take for instance doctors at Peking University, who just recently implemented a 3D-printed vertebrae in a 12-year-old patient. The boy had a malignant tumor removed from his spine and the team replaced the cancerous section with a unique 3D-printed piece.

“Although the probability is very low, it is possible that under long-term pressure from inside the body, traditional implants might plug into bones gradually, or become detached from bones. But there will be no such problems for 3D-printed implants,” Liu Zhongun, Director of Orthopedics, endorsed the flexibility of the process to Forbes.

Ideally, 3D printing will allow for more patients to be treated on a customizable, case-by-case basis, allowing for a remarkable improvement in many areas of the medical field. Explore the other ways the next-gen technology has already proven its success throughout healthcare, for both humans and animals alike.