Ready or not, 3D printing is going to be out of this world… literally! By the end of next month, NASA Aerospace Engineer Jason Budinoff is expected to complete an imaging telescope almost entirely out of 3D-printed parts. The 2-inch device could feasibly change the way the organization takes pictures in space. 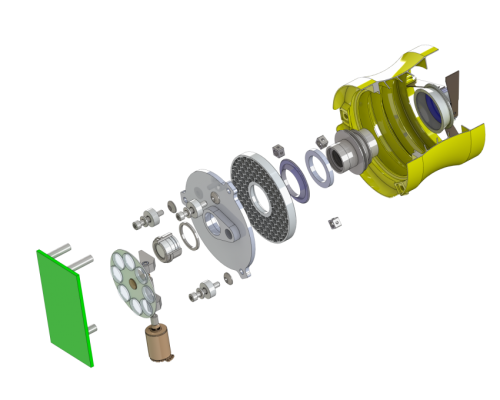 “As far as I know, we are the first to attempt to build an entire instrument with 3D printing,” Budinoff explains. The engineer is in the process of devising a fully-function 50mm camera whose outer tube, baffles and optical mounts are all printed as a single structure. The instrument is appropriately sized for a CubeSat (a small satellite made of individual units each about 100mm on a side). When equipped with mirrors and glass lenses, the instrument will undergo vibration and thermal-vacuum testing next year.

Budinoff describes his machine as a ‘pathfinder’ that is meant to probe the possibilities of further incorporating 3D printing technology into future space exploration. Aspiring to test the feasibility and durability of the medium with this project, the engineer hopes that “with 3D printing, we can reduce the overall number of parts and make them with nearly arbitrary geometries.” He ads, “We’re not limited by traditional mill-and-lathe fabrication operations.”

The engineer aims to complete the telescope by the end of the fiscal year, and afterwards, the entire assembly will undergo vigorous testing to assure that it is space worthy. He notes that if his low-cost gadget passes the tests, “We will have mitigated the risk, and when future program managers ask, ‘Can we use this technology?’ we can say, ‘Yes, we already have qualified it.’”

The one portion of the telescope that will not be 3D-printed will be the optical lenses, though Budinoff is contemplating a new way of designing mirrors with printed aluminum. If his idea of pressure treating unpolished mirror blanks proves viable, it could allow for an increase in these devices being forged as single structures.

Next year, the engineer has his eyes set on experimenting with printing instrument components made of Invar alloy, a material being prepared for 3D printing by Goddard technologist Tim Stephenson. The 100-year-old iron-nickel alloy offers extreme dimensional stability over a range of temperatures, and is ideal for building super-stable, lightweight skeletons that support telescopes and other instruments, NASA notes.

Ideally, Budinoff has high hopes for this courageous project. “Anyone who builds optical instruments will benefit from what we’re learning here,” the engineer proudly concluded. “I think we can demonstrate an order-of-magnitude reduction in cost and time with 3D printing.”