Back in January, the Ninja Blocks team launched a Kickstarter campaign for their highly-anticipated Ninja Sphere device, successfully garnering nearly $600,000 above their crowdfunding goal. What makes this platform so desirable? Not only does Ninja support a huge assortment of devices, but because of its its open source approach, nearly anyone can write and share a driver to connect a gadget to their sphere. 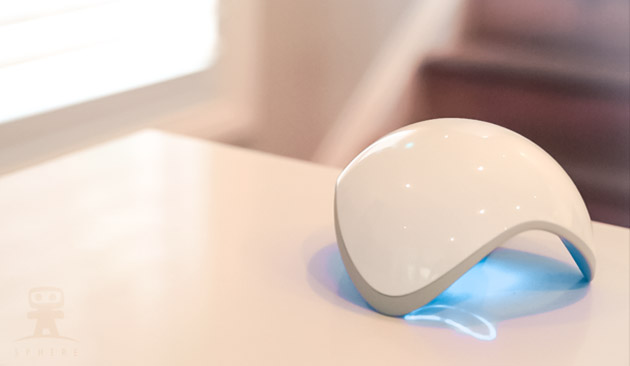 The Sphere has seemingly limitless possibilities to control your home. It can alert you if you walk out of the door without your keys or if you happen to leave the oven on. It can even learn your family’s patterns over time and adapt to your daily routine. The Sphere is an evolution of the earlier Ninja Blocks device, but takes that early machine’s potential to another stratosphere. Through connectivity via the Internet of Things, the Sphere unit not only has the ability to monitor your home environment, but the device itself functions as a customizable remote. With the Sphere, a user can engage touch controls and basic gesture movements to stay up to date with your surroundings. You can page through informational updates, or assign customized actions to taps, swirls, and swipes.

“Since the Sphere can connect to BLE devices, it can locate pets and items tagged with those small BLE locators like Gecko. It can even tell you if one of the things you’ve tagged has been moved and gives you the option to activate cameras in the room, if available. The device can also serve as a hub for Philips Hue, Belkin WeMo, and Dropcam, among other high-tech systems for the home,” Engadget’‘s Mariella Moon writes. Based on the device’s original Kickstarter page, these are but some of the things the Sphere can do, as it comes equipped with ZigBee radio for more advanced home automation and even comes with a USB port that allows for Arduino-based projects to be linked to the system.

Among other uses, these include:

The Ninja Blocks team touts the Sphere as a “brain for your home” and that may be the best way to describe the flashy white unit. Whether it is controlling the temperature of your toddler’s room, or alerting you to the whereabouts of your beloved family dog, the Sphere can be the focal point of the smart home of the future.

The Sphere is currently in a pre-order stage and this home “brain” could be yours for just $329. For more information about the IoT hub, you can click over to the Ninja Sphere site to see a full breakdown of the product.