The Internet of Things (IoT), as noted in previous Bits & Pieces articles, is really just a concept at this point because the “things” are undefined. As those “things” become more defined, the IoT’s things stop being just things and become something. So, the main question right now: What are those things going to be? Perhaps the IoT should more accurately be called the “IoXT” with “X” being the variable describing what that particular thing actually is. An example could be the Internet of wearable fitness trackers, factory robots, home automation, smart appliances, vehicle to vehicle communication, traffic control… well, you get the picture. The X can (and will) be many different things.

Clearly, for the IoT to be meaningful, the X must be identified in detail. The IoT must evolve from the ultra-general (i.e. “things”) to specific applications, components, systems, and integrated circuits, among others. There appears to be an emerging need for a classification hierarchy to describe the IoT as it differentiates and evolves. The Linnaeus classification model that is used in biology to describe living “things”, comes to mind. The same classification process can apply to silicon-based things and not just carbon-based things (beings).

Do you see the connection? 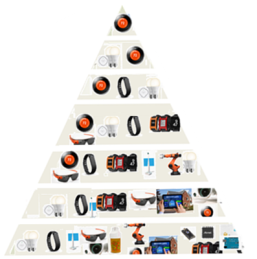 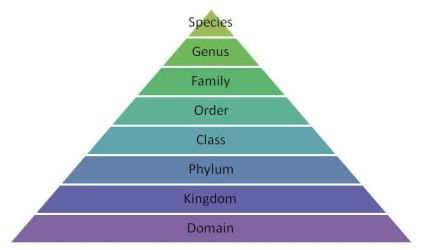 In a silicon-based classification regime, the term “IoT” would probably lie somewhere between phylum and family. Though it is not entirely clear exactly where yet, that does really not matter at this point; however, what matters is that engineers and product managers must push product definition to the genus and species levels for the IoT to ever truly matter.

In the early stages of IoT’s evolution, there could easily be a type of Cambrian explosion with the genesis of an insane number of new devices covering a wide spectrum of applications that from the truly inspired to the ridiculous. Economic Darwinism would later surely take over to narrow down the numbers overtime with many going extinct and others continuing to adapt into world-changing “things.” 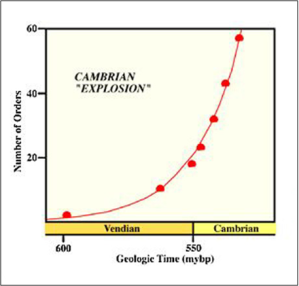 Because the IoT’s silicon building blocks (i.e. the DNA of IoT) are getting into place, it will become very easy to create, modify, and adapt countless smart, sensing, secure, communicating devices. That ease of design is what is making IoT’s potential staggering, and why so many companies (especially silicon companies) are aggressively pursuing the IoT market.

As for the numbers, Gartner believes 26 billion devices will have connectivity by 2022, while Ericsson and Cisco both forecast the number being even higher at 50 billion units by 2020 and 2022, respectively. McKinsey Global Institute (MGI)  expects IoT to have an economic impact of $2.7 to $6.2 trillion by 2025. Gartner notes that IoT suppliers will generate incremental product and service revenue exceeding $300 billion in 2020, resulting in over $1.9 trillion in global economic value-add in diverse end-markets. According to IDC, the installed base of IoT will be 212 billion by the end of 2020, with 30.1 billion of that being connected autonomous things. 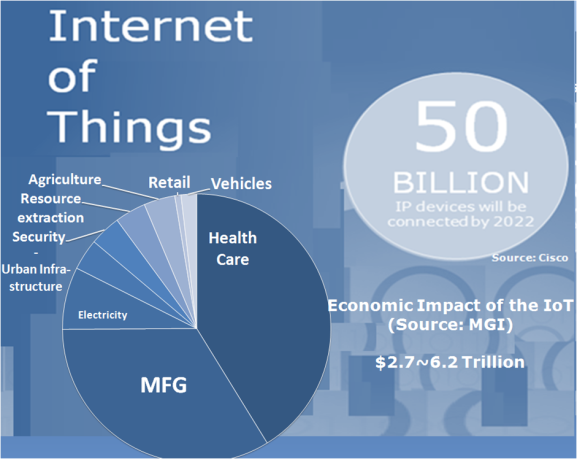 The following chart from McKinsey Global Institute details their view of the impact from various economic categories. Note that healthcare is the largest, which makes perfect sense given the affinity of bio-sensors, continuous monitoring, wearable devices, and wireless communication. Subsequently, it is no accident that the major mobile platform and consumer product companies are pursuing bio-metric capabilities for wearable products. 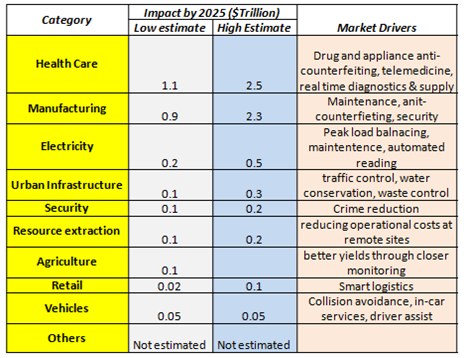 With an increasing demand for medical care as populations age in Western countries, remote telemedicine to cover under-served populations makes great sense. Telemedicine could easily revolutionize medical care, and connected-sensing devices could revolutionize telemedicine. There is little to hold the growth of medical sensing and communicating networks back, especially since governmental agencies are on a mission to extend the provision of health care universally. Perhaps this is a perfect storm.

Health networks will be joined by networks of many types; each of those will be driven by the ability to create IoT devices from their four main building blocks: 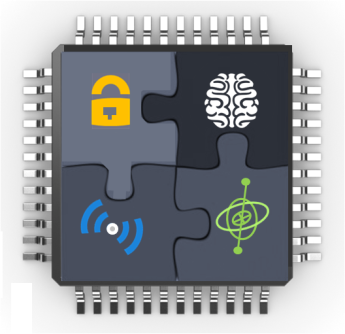 Devices with those fundamental IoT building blocks will differentiate on each of those four axes depending upon what they need to do. Some of the types of networks that could show up and drive the IoT’s evolution are noted below:

There are of course others, too.

One last thing: The dirty little secret of the IoT is that there probably cannot be such a thing as the Internet of Things if those things are not secure. That is where devices like Atmel CryptoAuthentication ICs play an important, if not catalytic role. Making sure that the nodes in the various networks are authentic and that the data being transmitted have not been tampered with is what CryptoAuthentication devices do. It is easy to see why security is important when there are billions of things keeping track of you, right?

So, authentication may in actual fact be the sine qua non (“without which there is nothing”) of the IoT.

Or, to put it another way: No security? No IoT for you.