According to a new report, the United States Postal Service (USPS) believes 3D printing could be a financial boon for the agency, increasing annual package revenue by $323 to $646 million in the future. 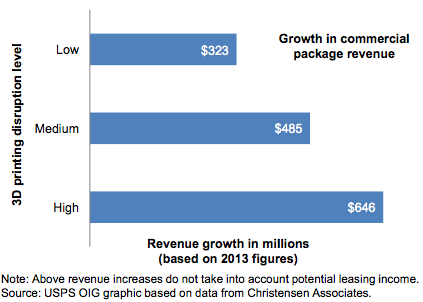 “As 3D printing spreads and moves production closer to consumption, it could have major implications for everyone along existing supply chains, including the U.S. Postal Service. 3D printing could lead to more single-item parcels being shipped to consumers over shorter distances, instead of hundreds of thousands of identical items sent by containerized cargo over vast distances. It could also lead to reduced fuel consumption and exhaust emissions, as well as less material waste due to precise manufacturing.”

As previously reported in Bits & Pieces, 3D printing is set to soar with analysts forecasting the industry to reach $16.2 billion by 2018 – representing an expected compound annual growth rate (CAGR) of 45.7% from 2013 to 2018. Given its potential size, the USPS believes 3D printing could start to reshore previously outsourced manufacturing back to the United States. In the very near future, it appears 3D printing could be a powerful engine for job creation and economic growth.

“It is often not cost effective for private delivery firms to make separate stops to deliver small, relatively inexpensive packages — particularly in rural areas. However, the Postal Service is already visiting these locations every day. As such, other delivery firms often use the Postal Service for last-mile delivery. In fact, nearly two thirds of lightweight, commercial packages are delivered to their final destination by the Postal Service. This is directly relevant to 3D printing, as the vast majority of 3D printed consumer goods are relatively lightweight.”

Aside from delivery, the postal service looks to utilize the technology to protect copyrighted content through the development of a trusted online marketplace to allow the safe transmission of designs and integrate it with physical product transfers with carriers. As the report states, this could bring an paralleled level of security, confidentiality, and privacy.

Internally, the next-gen technology could also provide operational benefits for the agency, such as the printing of spare parts to repair vehicles and mail processing equipment.

“The 3D printing revolution has only just begun. 3D printing has the potential to be amazingly disruptive, and some people think the changes brought on by it will exceed even those of the Internet.”

3D printing isn’t the only Atmel-powered movement the USPS is embarking on. Last month, the Office of Inspector General reported that the postal service was investing up to $100,000 to explore ways in which it could utilize low cost sensors and Internet of Things-related technologies.