Mr. Beam – which recently made its Kickstarter debut – is an open source DIY laser cutter and engraver kit for paper, wood and plastic.

“Mr. Beam is able to process materials of variable thickness. Height adjustable legs allow an easy setup for thin paper as well as for a large piece of wood,” a Mr. Beam rep explained. 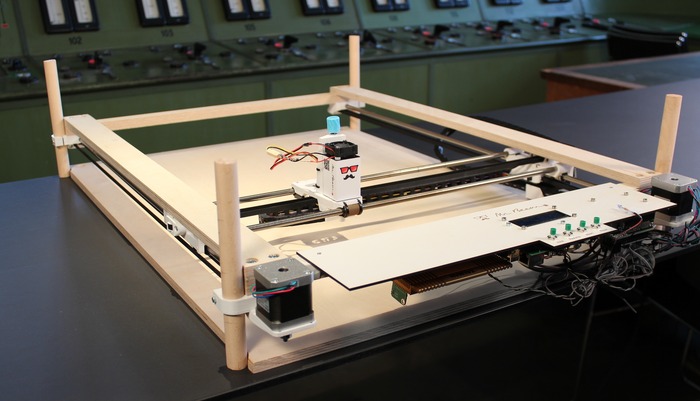 “[The platform] cuts lighter materials like paper and foil in one pass and thicker materials [such as] leather and cardboard in multiple passes. As with all laser cutters, the ability to cut materials properly is determined by their thickness. Most of the mentioned materials can be engraved in a single pass, others like wood might require several passes.”

So, how does Mr. Beam work?   Well, the Raspberry Pi (running Raspbian) operates the web interface responsible for generating g-code from the user-supplied input files (the motif). Meanwhile, the Uno runs the grbl software tasked with taking g-code and converting it into stepper motor actions (effectively controlling laser diode intensity). Last, but certainly not least, the custom Beam shield is equipped with various electronic modules and components that handle the input from Arduino/grbl – powering the steppers as well as the laser and regulating the hardware buttons.

On the software side, Mr. Beam’s user interface can be used to select motifs and kick off the cutting process. Future additions are slated to include the ability to easily position, rotate and scale various patterns.

2 thoughts on “Laser cutting and engraving with Mr. Beam  ”