Over three-quarters of companies are now actively exploring or using the Internet of Things (IoT), with the vast majority of business leaders believing it will have a meaningful impact on how their companies conduct business. 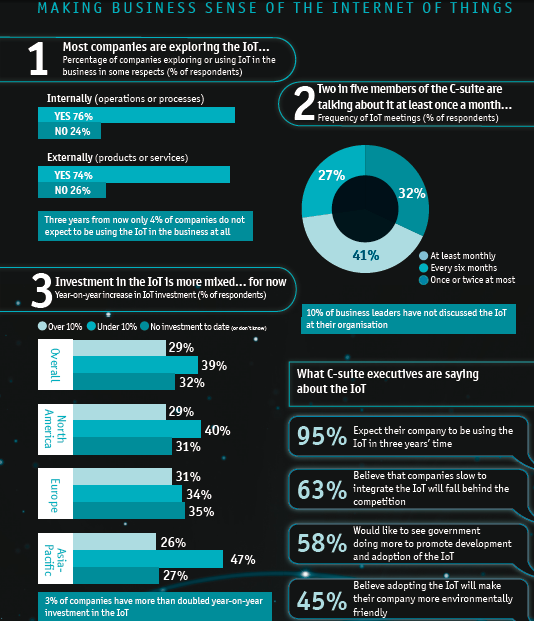 Based on current estimates, the number of “things” predicted to be connected to the Internet by the end of this decade range from a staggering 30bn to 50bn.

Clearly, consumers will likely soon be awash with IoT-based products and services – even if they may not realize it. As Clint Witchalls notes in a recent report sponsored by ARM, data is therefore a fundamental component of the IoT’s future.

Indeed, fitting sensors to a potentially infinite number of “things” will generate untold amounts of new information. However, most business leaders remain confident that their organizations will be capable of managing and analyzing the data flowing from the predicted rapid expansion in IoT networks. The solution will be finding an acceptable balance that does not slow the system down to the extent that it becomes unworkable. This is obviously a challenge for organizations, but one that is surmountable.

To be sure, says Witchalls, the IoT is a quiet revolution that is steadily taking shape. Businesses across the world are piloting the use of the IoT to improve their internal operations and are preparing a stream of IoT-related products and services. Consumers might not (initially) recognize them as such, but that will not stop them from being launched, as few end users need to know that user-based car insurance, for example, is an IoT-based application.

Yet some important unknowns remain, Witchalls acknowledges. Perhaps most importantly, nobody knows what the winning business models are going to be. Even seasoned management consultants will struggle to provide definitive answers. Simply put, it is likely a matter of experimenting with different models to see which ones work.

The main message for latecomers and doubters? Consider the opportunities offered by the IoT—if nothing else than to improve internal operations. To be sure, there is a consensus that companies which are slow to integrate the IoT risk falling behind the competition. As such, the next step for business leaders is to decide what IoT commitments and investments they are ready to make, and where.

Interested in learning more about the rapidly evolving IoT? Part one of this series can be read here, part two here, part three here and part four here.

3 thoughts on “IoT: A quiet revolution is taking shape”