Yesterday, we talked about Atmel microcontrollers (MCUs) being used to produce warm and inviting light without flickering or humming (fluorescent ballast). Today, we’re going to be taking a closer look at Atmel’s family of general illumination LED drivers which are designed to facilitate intelligent system control for multiple LED parallel arrays. 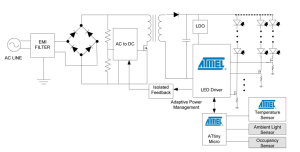 “Lighting OEMs can use white, RGB and white with red LEDs to achieve the desired white gamut and color control, while Atmel LED drivers are capable of setting an LED current to the desired peak and white point. Devices such as Atmel’s MSL2100 can also be used to individually program each string current to its targeted peak.”

Dimming is achieved by PWM or decreasing the LED constant current. Depending on the desired lighting requirements, one to 16 LED strings are employed in solid-state lighting (SSL) applications. Plus, external NFETs enables an application to sink from 350mA to 1A per string, all while supporting high-voltage LED supplies such as 260VDC.

2 thoughts on “A closer look at Atmel’s LED drivers”