Color Field describes a style of abstract painting that first emerged in New York City during the 1940s. The style – inspired by European modernism – is closely related to Abstract Expressionism. Indeed, Color Field paintings typically feature large fields of flat, solid color spread across or stained into the canvas – thereby creating areas of unbroken surface and a flat picture plane. This allows color to be free from objective context and becomes the subject itself.

Up until now, all notable Color Field painters have (understandably) been human. However, a robotic arm named Neko is about to shake up the status quo. Designed by Laura Lippincott, Neko was brought to life with an Arduino Mega (Atmel ATmega 1280), hobby parts and a 3D printer. The ‘bot is currently being primed with color data in an attempt to make him more creative.

“I hope to give Neko a brain. The thing all Machine Learning algorithms need is lots and lots of data. I can go through text books and online museum archives on my own, but what I want are individual responses for individual colors,” Lippincott explained in Kickstarter blog post.

“Once all the donations are pledged, Neko will begin at the first tier and work his way up. The higher the donation, the more intelligent Neko will be by the time he gets to it. I’ll also work reverse-chronologically, so that earlier donors get the more informed paintings.”

According to Lippincott, robots are actually “natural painters,” as they are patient, immune to toxins and steady handed. Plus, a robot’s ability to process massive amounts of data allow for new insight into patterns of beauty and symbolism. 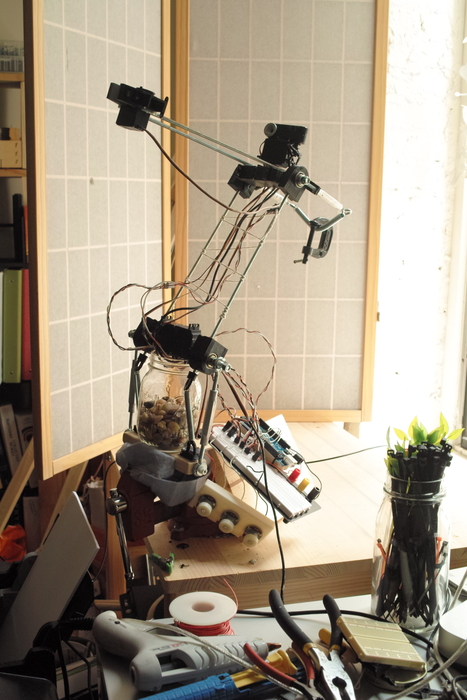 “I think the emergence of a non-human standard of taste would have a beneficial impact on the art world. I’ve been building painting robots since 2008,” she said. “I take my work slowly and seriously, only considering one small aspect of painting at a time.”

Although Neko first began painting in late 2012, he has already showcased his work at various events in San Francisco and New York.

“In his first iteration, he painted gradients of whatever two site-specific colors I put on his palette. Right now he only knows the pattern of dipping and applying to create a gradient. He’s more like an old-fashioned automaton than a robot,” Lippincott continued.

“[That is why] Neko needs a learning algorithm. He makes paintings for specific people, in a type of portraiture. Right now I’m doing all the data collection for him: interviewing the sitter, reading books on pigments and color symbolism, testing different pigment blends. I’m collecting all my findings in a comprehensive database. Soon, Neko will be able to consult this database and incorporate his own findings.”

Lippincott also noted that she wanted Neko to be capable of both supervised and unsupervised learning. 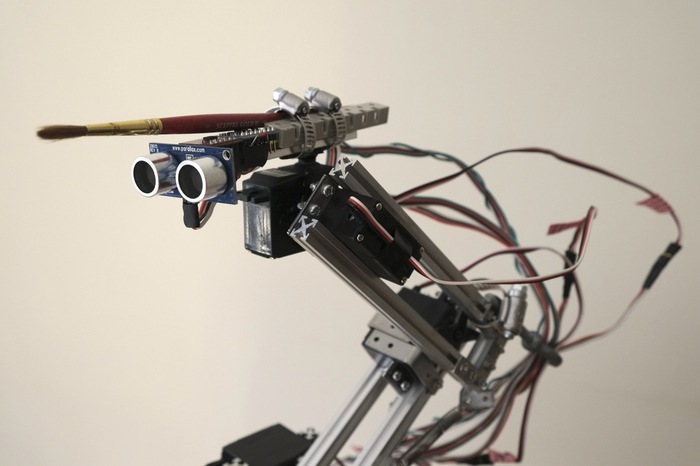 “I want him to teach me some novel color associations, so I’ll work on a clustering algorithm to go through art history texts and look for frequently paired words and pigments. That’s unsupervised learning. When Neko proposes a color for someone’s portrait, I’ll ask them to supervise his learning by honestly answering ‘yes’ or ‘no’ when he asks if they like it,” she added.

1 thought on “Neko is a Color Field robotic oil painter”