We knew that Atmel’s Atmega328P-PU chips were popular, but bootloading 1,000 of them? Yet that is what exactly what Annika “Skywalker” O’Brien did just a few days ago, as you can see in the picture below.

So why would anyone be bootloading 2,000+ Atmel Atmega328P-PU chips? Well, perhaps it has to do with Annika’s recently funded Kickstarter project, namely building an ultra-low cost development platform for micro-robotics which can be easily assembled with through-hole components and a soldering iron. 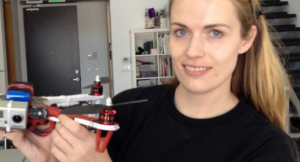 And last, but certainly not least, a socket for Atmel’s Atmega328 compatible with Arduino IDE. As Annika notes, the microprocessor can be easily swapped out with others for field upgrades or if the chip gets fried.

Annika’s Kickstarter project successfully met its Kickstarter goals back in March, raising a cool $24, 553 from 709 backers. Additional information about the initiative can be found here.