So after the Silicon Valley electronic flea market, we go over to Bobbies breakfast bistro and compare purchases and catch up on the scuttlebutt. We get there about 9:30AM. Here are a few snaps of recent items. Note that the eFlea closes in the winter, from October to February, but we all still go to the breakfasts, just to keep up on recent happenings.

When Hans Camenzine died several of my pals gave tribute to the inventor of the 555 timer chip, the biggest selling IC in history. Here is Kenneth Finnegan with Han’s book, and a T-shirt David L. Jones did to honor him.

My buddy Eric Schlaepfer built a 555 out if discrete transistors in honor of Hans. It also honors Jim Williams, who did similar functioning electronic art.

Here is our pal Richard King, who is over at power storage startup STEM. At the bottom you can see the 1862 telegraph pole wire anchor, something he inherited from his grandpa. We always bring some show-and-tell to the eFlea breakfast.

Brocade employee Rob Bowers brought a series of Ham radios he has owned over the years, to highlight the enormous cost reductions and size improvements.

Here is some radio craft magazines that Steve found last year at the eFlea.

And crack mechanical engineer Dave Ruigh shows off his admittedly half-$#%ed antenna kludge so he can better download Top-Gear episodes over his 4-G hot spot. He says it even works in his glove box. He has gone on to design something a bit less unsightly, but you folks know how prototypes look, so don’t give him any guff. 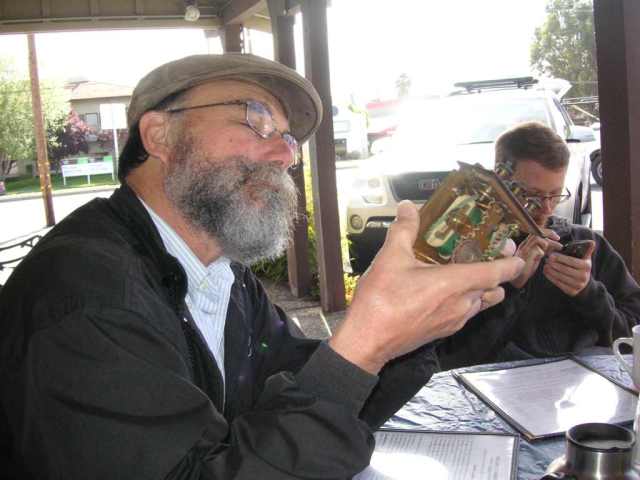 Here pro photographer Vini Carter looks at a mystery gizmo that Richard King found on eBay. Eric Schlaepfer is in the background, doing what Google employees love to do, fiddle with their Android. Vini is the guy that restored a sulfur dioxide refrigerator. His wife makes him keep it on the back porch, and Vini agrees that is probably for the best. If you see the haz-mat trucks in his neighborhood, you will know the deicing went all wrong.

So see what I mean about a fun time for all on the second Saturday of the month here in Silicon Valley? If you can’t drag yourself out of bed at 5:00AM, feel free to just show up for the breakfast. There are usually 12 or so people that make the breakfast, but there is always room for more.